A Long And Winding Road 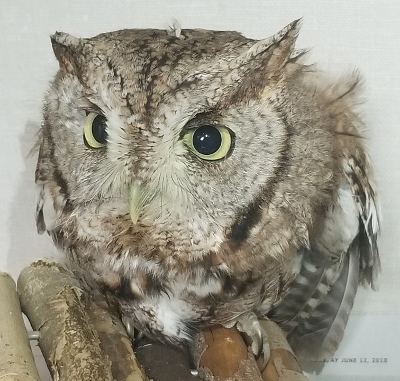 The road to recovery can be a long one, but this little screech owl is well on his way.

He was found a couple of weeks ago by a local resident in Bowmanville, which is about 75 kilometres east of Toronto. The screech owl was suffering from a broken wing in the chilly November weather. The kind citizen brought the little owl to Bowmanville Veterinary Clinic, where he was assessed. The clinic then called The Owl Foundation to see if the type of fracture was able to be repaired.  The Owl Foundation told the clinic to call our Dr. Evan Mavromatis so he could provide consultation on the case. Dr. Mavromatis told them it would be a tough repair, but it could be done. The little owl was then transported from Bowmanville 178 kilometres away to The Owl Foundation, which is based in Vineland Station near St. Catharines, Ontario. There, he was cared for until his big surgery day at our clinic.

And then came the day for the little screech owl to have surgery. He was transported from The Owl Foundation to our Toronto clinic last Tuesday. His wing was broken very close to the shoulder, making the surgery quite complicated. Under the guidance of Dr. Mavromatis, our Dr. Michelle Yee took the lead on this delicate procedure.

The surgery was a success and shortly after waking up from the anesthetic, the screech owl was spreading his wings! But he is unable to fly yet and has been taken back to The Owl Foundation where he is being rehabilitated with the goal of releasing him back into the wild.

The Owl Foundation is a charitable organization that helps rehabilitate injured and orphaned owls and occasionally other raptors so they can return to the wild where they can survive on their own. Our veterinarians and staff volunteer their expertise and surgical services for The Owl Foundation. Please click here to find out how you can help The Owl Foundation and the birds in their care.