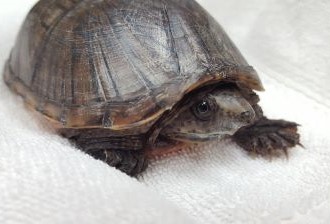 May is a special month for turtles and tortoises as World Turtle Day is celebrated every year on May 23rd, so we thought it would be fitting to feature the musk turtle as our Animal of the Month for May. But now May is coming to a close today, so we have to say goodbye to the musk turtle. If you were following us all month on Twitter @ExoticPetVets, we hope you enjoyed our tweets all month long about this turtle who is found in Ontario and Quebec. If you missed any of our tweets, we have compiled a summary for you. Did you know?: