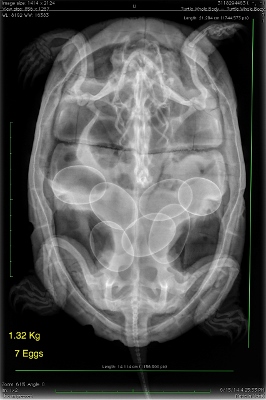 It was a bittersweet Father’s Day for Dr. Rick Axelson.  Rick was out for a walk Sunday afternoon with his wife not far from the The Links Road Animal & Bird Clinic and found a mature Blanding’s turtle along Yonge Street just south of York Mills.

Rick found the turtle, barely alive, just off the sidewalk next to a newspaper box.  She was suffering from what would prove to be a lethal head injury.  It looked like the turtle was hit by a car and Rick believes someone may have moved her off the road at some point and placed her next to the sidewalk. 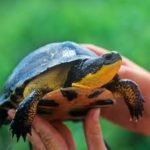 The Blanding’s turtle is a beautiful Ontario turtle that is considered threatened and it is very unusual to find one in such a bustling location in Toronto.  These turtles can live to be about 75 years of age.

Rick saw that this turtle appeared to have been “shell-notched” – she had three small notches cut out of the back of her shell and one in the middle of her left side – which means she may have been part of a study.  In the past, notching the shell was a way to make an identification number or code.  But it is unlikely this turtle can be traced back to any one particular person or institution and how she ended up on busy Yonge Street will probably remain a mystery.

Rick took the turtle back to the clinic. He gave her supportive care, treating her with fluids, antibiotics and pain management. She was alive, but probably brain dead because of her devastating head injury.  She passed away overnight at the clinic.

But, there is a happy twist of fate to this sad story. X-rays revealed this turtle had seven eggs inside of her.  Rick called his vet school classmate and friend Dr. Sue Carstairs, who is the staff veterinarian, executive and medial director at the Kawartha Turtle Trauma Centre in Peterborough.  Rick drove the turtle’s remains yesterday to Dr. Carstairs in order to facilitate the transfer to the KTTC, where Dr. Carstairs harvested the eggs as there is a good chance they are fertile.

If all goes well, the KTTC will incubate the eggs until an anticipated hatch in August. These eggs are joining an estimated 2,000 eggs that are being rescued and cared for by the KTTC from across Ontario.  If the eggs hatch, the KTTC will care for the baby turtles over the fall and winter months. With some luck, there could be seven rare baby Blanding’s turtles that Rick, his wife and daughter might be able to help release back into the wild next spring.  That would be a rewarding and belated Father’s Day gift for Rick after such a fateful discovery.

The Kawartha Turtle Trauma Centre is a charitable organization whose mission is to protect and conserve Ontario’s native turtles and their habitat.

Please click here to find out more about The Kawartha Turtle Trauma Centre and how you can help Ontario’s turtles.