By Lifelearn Admin September 4, 2019 No Comments 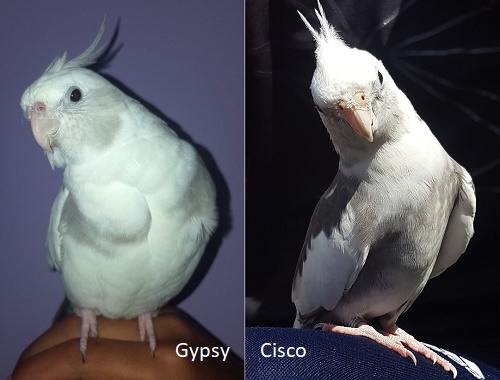 It has been an unforgettable summer for our Dr. Hanadie Nur; she adopted not one, but two cockatiels!

In July, five-year-old Cisco came into her life. Cisco, who was homeless at the time, was brought to our clinic by Toronto Animal Services, where he wasn’t eating well and they were worried he’s losing weight.

“The moment I opened the carrier I fell in love,” said Hanadie. “He let me snuggle him and he was so handsome. He stole my heart.

“Once we admitted him in hospital, I realised he wasn’t eating because he needed people around him and cuddles to eat. Later that day I called Toronto Animal Services and asked if I could adopt him and the rest is history.”

Hanadie took some time off in August and while she was away, Gypsy arrived at our clinic. She says everyone at the clinic was sending her photos of Gypsy and telling her how cute she was. “They knew I would fall in love with her as well. They were right, as the moment I came back she also won over my heart,” Hanadie said, adding that Gypsy has a cheeky personality and would be a good companion for Cisco.

And Hanadie was right about Gypsy and Cisco being great companions for each other. After all, they are named after the characters Cisco and Gypsy on the TV show The Flash! But Hanadie says they didn’t put both birds together right away. “We tested how they were together first and when we found they got along they were placed in same cage, ” she said, noting that both Cisco and Gypsy are kept separate from Lexus, who is the family’s Senegal parrot. “Lexus is a larger bird and can hurt them.”

They have also settled in nicely with their new family. Hanadie says her children are enjoying handling them and taking on some responsibilities for their care under her strict supervision.

They are also enjoying getting to know Cisco and Gypsy’s personalities. “Cisco loves his baths. He fluffs up and looks like he’s having a party. With Gypsy, you have to be careful when you’re eating junk food around her as she will literally jump into your bag of chips!”

Hanadie is passionate about adopting rescue animals who need families to call their own. “There are so many animals out there who are waiting to be loved and who need homes,” she said. And as her adoption of Cisco and Gypsy illustrates, it’s not just cats and dogs who can be adopted from shelters and rescues. There are multitudes of birds, reptiles and exotic mammals who are waiting for their forever homes.

Like many animals who end up in shelters or rescues, Cisco and Gypsy’s histories are unclear and it’s not known what they may have experienced in their lives before entering their respective shelters. But what we do know now is that they both have life stories that end with “happily ever after.”