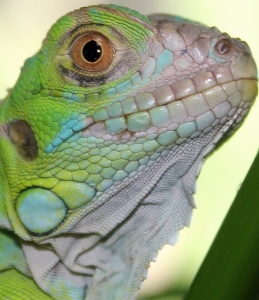 We’re sure they enjoyed their time basking in the spotlight over the past month, but now it’s time to bid the green iguana a fond farewell as our August edition of Animal of the Month comes to a close.  We hope you enjoyed our tweets about these social and popular reptiles while you followed us on Twitter @ExoticPetVets. Here is a summary of our tweets in case you missed any. Did you know?: