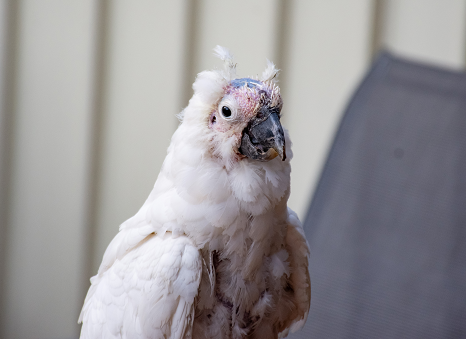 This disease was first described in Australian cockatoos in the early 1970s. Since then, the disease has infected over 50 different species of birds. The virus causing the disease works slowly. The original name Psittacine Beak and Feather Disease (PBFD) comes from the fact that the virus attacks fast-growing epithelial cells, commonly causing visibly abnormal formations of the beak and/or feather follicles. In general, PBFD affects parrots that are native to Africa, Australia, New Zealand, and Indonesia. It is rare in neotropical parrots.

Psittacine beak and feather disease virus is a member of the Circovirus family of viruses. Avian circoviruses affect not only parrots but pigeons and chickens as well. This handout focuses on parrots (psittacines) with PBFD.

How do birds become infected with the virus?

When exposed to a bird that is positive for PBFD, susceptible birds can become infected through the oral cavity, nasal passages, and through the cloaca (the common receptacle in which the urinary, gastrointestinal, and genital tracts empty). The virus is readily shed in the feces and the crop (storage area of the stomach). Viral particles shed into the crop may explain how the virus is passed from parents to offspring (during feeding of crop milk). High concentrations of the virus are shed in feather dust from infected birds, which increases the chances of its spread by people, on their clothing or hair.

What are the clinical signs of psittacine beak and feather disease?

Infected birds may take weeks to years before showing any clinical signs, often depending on the bird’s age. Often, the first visible clinical sign is either necrotic (dead), misshapen, or abnormally formed feathers (feather dystrophy), or severe beak deformation. Once symptoms are noted and the diagnosis confirmed by laboratory analysis, most birds die from secondary infections within months to years after presentation.

"Affected feathers may appear stunted, club-shaped, or pinched off."

Affected feathers may appear stunted, club-shaped, or pinched off. Beak malformations usually occur in white cockatoo species and appear elongated, excessively flakey, or shiny and easily break with simple handling. PBFD infection may occur at any age but is most common in birds under three years of age.

Several forms of the disease may be seen. The form of the disease seen in an individual bird is influenced by the age of the bird when infected and the species of bird infected.

Peracute
This form occurs in neonatal (recently hatched) birds. Clinical signs are generalized weakness and depression caused by septicemia (blood poisoning), which is often accompanied by pneumonia, enteritis (infection of the small intestine), weight loss, and death. The diagnosis is easily missed if a necropsy (veterinary autopsy) and histology (microscopic examination of tissues) are not performed on birds that die suddenly, since these young birds die before feather abnormalities are recognized.

Acute
The acute form develops in young birds infected as they develop their first feathers. The signs include depression for a couple of days followed by sudden changes in the formation and appearance of the developing feathers, including premature molting. Some of these birds may die within two to four weeks

Chronic
This form occurs in older birds, and these birds progressively develop abnormal feathers in a symmetrical pattern that becomes apparent after each new molt. Short, clubbed feathers and deformed, curled feathers are seen. These changes occur in birds that have survived the acute stage of the disease. If affected birds live long enough, they may develop baldness. Beak deformities in juvenile and adult cockatoos may develop, occurring after substantial feather changes have taken place.

African grey parrots present with PBFD differently. These birds usually do not show feather or beak abnormalities; they present as generalized sick birds that are anemic (low red blood cell count) and/or have a very low white blood cell count. This is because the virus infects cells in the bird’s bone marrow, causing pancytopenia (a reduction in blood-forming cells).

How is the disease diagnosed?

A skin and feather biopsy of sections of abnormal feather formation may be taken and sent to an avian pathologist to analyze for microscopic features the PBFD virus creates in diseased feathers. A blood test or sterile swab of the oral cavity using a DNA probe is a non-invasive method to diagnose the presence of the virus.

How do I know if my bird is infected?

Birds can be screened for the PBFD virus using a simple blood test. New birds should always be screened for the disease. A newly acquired young bird that is infected may not show clinical signs for quite a while, and the owner should be aware of this. Many new birds are sold with a health warranty so that if a bird tests positive, it should be covered under the warranty, allowing the buyer to return the bird if desired. If you plan to purchase an additional bird, have both the resident bird(s) and new bird tested before they are exposed to each other. Birds that are both symptomatic and test positive for PBFD via DNA probe are considered highly contagious to other psittacines.

"If you plan to purchase an additional bird, have both the resident bird(s) and new bird tested before they are exposed to each other."

How is psittacine beak and feather disease treated?

Unfortunately, there is no treatment for this usually fatal disease, though supportive care and a stress-free environment can extend the life of your bird. Your veterinarian can advise you in providing these for your bird. Infected birds should be kept isolated from non-infected birds, as the disease is easily transmitted. Do not let other people who also own birds visit or play with your PBFD-positive bird. PBFD birds should never be taken to a boarding facility that houses other birds. Ensure your veterinarian is aware of your bird’s condition ahead of your appointment.

© Copyright 2022 Lifelearn Inc. Used and/or modified with permission under license.