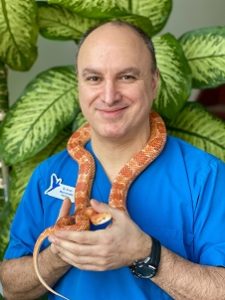 Evan is a native of Toronto and continues to call this city his home. Together with his wife, they enjoy the company of their nine crested geckos, poison dart frogs, cat and two tanks filled with fish. In his spare time, he keeps in shape by playing hockey and working out. He also enjoys participating in a variety of other sports as well as drawing and the outdoors.

In 2004, Evan became a partner of The Links Road Animal & Bird Clinic.