He was 2 months away from his 2nd birthday. The last 2 weeks I could feel he was close to the end. He hasn’t been active, and much less like him self.

I gave him more attention in the last 2 weeks than I usually did; I thought it would be easier knowing that he was close to the end, rather than my 1st hamster who passed at 9 months of age. It really isn’t, especially when I took him out today (03/10/20) and could see his breathing slowly slowing down and passing in my arms. 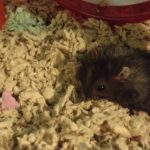 OUR EMERGENCY HOURS FOR THE WEEK ENDING JANUARY 24, 2021:

If your pet needs emergency medical attention while we are closed, please call Campus Estates Animal Hospital at 519-837-1214. By appointment only during our regular business hours - Appointments start at 10 a.m.; drop offs and pick ups as of 8 a.m.