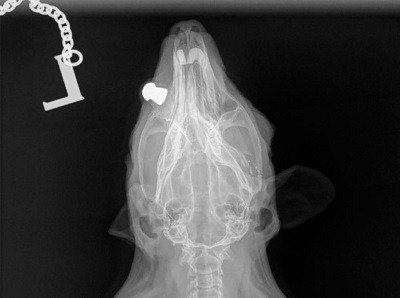 In an ideal world, we wouldn’t need to tell people to be kind to animals because everyone would show kindness and compassion towards animals every day. But in reality this is unfortunately not the case. It’s Be Kind To Animals Week, which is marked during the first week of May every year. And even though this is the 106th annual Be Kind To Animals Week, sadly, some people still don’t get the message. Case in point: our patient, a squirrel named Grace.

Last month, a good Samaritan found an injured adult female squirrel who was taken to Wildlife Haven Waterloo, a volunteer-run wildlife rehabilitation organization in Waterloo, Ontario. The squirrel, who was named Grace by a volunteer, had what was initially believed to be a puncture wound on the left side of her head. Grace had blood coming out of her nostrils and the eye closest to the puncture wound was bloodied. Grace’s head was also swollen. 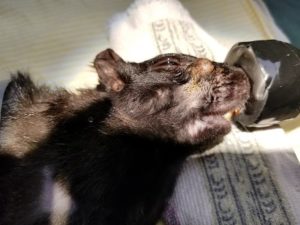 Upon further inspection, a volunteer noticed a hard lump just under the skin on the side of Grace’s face opposite to the puncture wound. It was then suspected that the puncture wound wasn’t a puncture wound at all – rather, it was an entry point. Grace had been shot and a pellet was lodged in her head.

Our x-rays show (from left to right): a) the pellet’s entry point and the path it travelled through Grace’s head, b) the side view and c) the areas with bone fragments that needed to be removed. 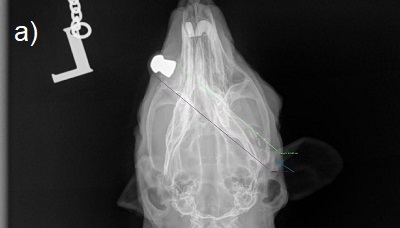 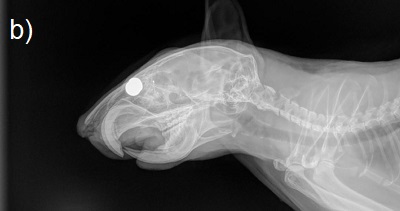 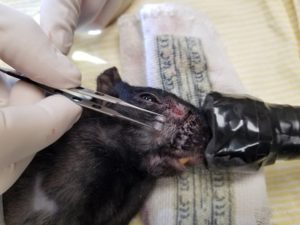 Grace came to our clinic last week and our Dr. Evan Mavromatis took Grace to surgery. He removed the pellet and the bone fragments that were caused when the pellet ripped through Grace’s head.

The surgery was a success and we are pleased to report that Grace is recovering well. The volunteer overseeing Grace’s care says Grace was back to her normal self about 36 hours after her surgery, but still exhibits signs of partial or complete blindness. Grace will be rehabilitated with the goal of releasing her back into the wild. But if her sight does not return, she will live out her days in the safety of captivity.

Wildlife Haven Waterloo is a 100% volunteer-run organization that helps rehabilitate injured and orphaned wildlife so they can be released back into the wild where they can survive on their own. While they are authorized to rehabilitate wildlife by the Ontario Ministry of Natural Resources, they receive no government funding and their work is funded out-of-pocket by the volunteers themselves and through donations from the public. Please click here to find out more about Wildlife Haven Waterloo and how you can help.

*Please note that Grace’s case was unusual and our clinic does not see wildlife on a regular basis. If you have an urgent matter regarding a wild animal or bird, please contact either the Toronto Wildlife Centre at 416-631-0662 or Shades of Hope Wildlife Refuge at 705-437-4654.