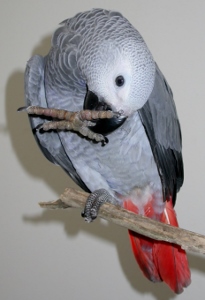 We are saying good-bye to the African Grey parrot as our Animal of the Month for April – and these talkative birds could very well be replying with their own farewell to us!   We tweeted fun and interesting tidbits about these intelligent birds throughout the month on our Twitter feed @ExoticPetVets.  In case you missed them, here is a summary of our tweets. Did you know?: